Vanessa had been suffering with shoulder pain since October 2014, when she felt for the first time a “ping” in her left upper arm.

Over the following 6 weeks, her upper left arm and shoulder area became increasingly painful, and stiff. Movement in the shoulder socket progressively locked. As all GP Doctors were away during the Christmas period, she was unable to see anyone until early January 2015. She was prescribed Paracetamol in December 2014 by the locum Doctor, but painkillers did not work.

Vanessa was able to get an appointment with an Orthopaedic Surgeon in January at Spire Wellesley Hospital in Essex, where she got x-rays and an MRI scan of the shoulder. The orthopaedic surgeon diagnosed her with a frozen shoulder without adhesions.

On February 4th 2015, she had a Manipulation Under General Anaesthetic (MUA) operation. The outcome was a slight improvement in range of motion, but disappointingly she still had intense pain in her left shoulder.

Two weeks after the operation Vanessa met again with the same surgeon due to this pain. She had another x-ray to check for damage, and once all was cleared the doctor gave her a second cortisone injection, as the family was planning to go on a holiday. Cortisone gave Vanessa a brief relief from the pain, which lasted for about 2 weeks.

Vanessa was also visiting a physiotherapist throughout this time, but it proved to be ineffective.

After the failed physiotherapy, she decided to try a local chiropractor that she already knew. She attended for 4 weeks (3 times a week), but this appeared to only aggravate the pain, and did not help her shoulder. As she saw no progress and decided to stop.

On 21st April 2015, Vanessa had her third cortisone injection, hoping to at least get some brief relief from the pain. To her disappointment, the cortisone shot was ineffective this time around.
In an attempt to subdue the pain she was also prescribed Fentanyl patches (Codeine).

In May 2015 Vanessa started attending a Sports Injury Specialist who specializes in Neil-Asher Technique (NAT), and have been seeing him twice a week. She had some positive result regarding the pain, which became more of an ache rather than pain. But as she jolted her arm, she was now in constant intense ache, which was going from her left shoulder, down to her elbow, wrist and her hand. 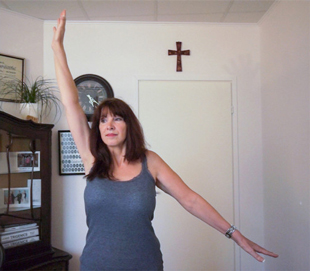 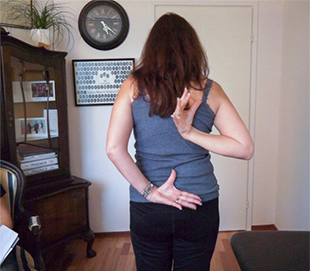 Vanessa’s range of motion prior to the MCD procedure

At this point Vanessa had been suffering with frozen shoulder pain for more then half a year. She had tried painkillers, cortisone injections, Manipulation Under Anaesthetic (MUA) operation, physiotherapy, chiropractic treatment, and the Neil Asher Technique (NAT). None of them helped. She was still experiencing pain, and was unable to function normally in her every day life.

Still hoping to find some solution, she searched for any option on the internet. She found out about the World Frozen Shoulder Clinics and the MCD procedure. Although skeptical, she didn’t hesitate to get in touch.

On July 7th 2015 Vanessa flew with her husband to Estonia where she had her shoulder fixed with the MCD Procedure. This time for good!

Below is Vanessa prior to the MCD Procedure describing the outcome of her Manipulation Under Anaesthetic (MUA) operation as well as other treatments and procedures she had tried.

In the video below you can find out more about Vanessa’s MCD procedure and her recovery.

Like many other frozen shoulder sufferers, Vanessa also was not able to do many things due to her frozen shoulder condition. Things which we normally take for granted, but due to the excruciating pain suddenly are unable to do. For Vanessa one of this things was to drive her car on her own. Get your frozen shoulder treatment and start living a happier life!

As it had a manual gearbox, she was unable to use it. Prior to the MCD Procedure she was thinking about selling it and buying an “automatic”. Thanks to the successful MCD procedure Vanessa got to keep and drive her own car!