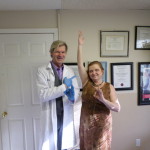 I have been a registered nurse for 22 years in Indiana, USA. Strangely enough I have never heard of frozen shoulder or knew anyone who had these symptoms. I began doing internet research for extremely painful shoulder. I found adhesive capsulitis but the description did not sound nearly as painful as the symptoms I was having (I guess if you have never suffered from this atrocity you would not be able to describe the terrible pain or even have empathy for the pain).
I went to an urgent care center that performed an x-ray and said there was nothing showing on the x-ray. The first professional I chose to go to was my chiropractor. He told me that I was having classic symptoms of frozen shoulder/adhesive capsulitis. He gave me exercises to do but they were so extremely painful I could not do them. I scheduled an appointment with my family practitioner. He sent me for a MRI and scheduled me to go to see an orthopedic physician. The ortho doctor reviewed my MRI and took additional x-rays. He told me I had adhesive capsulitis and tendonitis. He also gave me orders to go see a physical therapist three times a week for a month then return to him for steroid injections.

My range of motion had all but disappeared. It was difficult to wash, brush, or style my hair, to put on or take off clothing, to drive or even give hugs to my family. I left the orthopedist’s office in tears. I could not imagine the pain of physical therapy. I just kept thinking if I can’t move my own arm without pain how could someone else without knowing the level of my pain. Furthermore I was afraid more damage would be caused.

I was on Facebook one day and typed in frozen shoulder. Two primary sites appeared. One was a support group and the other was a World Frozen Shoulder Clinic page. I asked to join the support group as I was becoming so depressed due to the constant pain and fear this would never go away. No one that I knew had any idea what I was going through. I began searching through the FB page. I saw a video that I watched in absolute wonder. I kept asking myself, could this be true? I went to You Tube and found additional videos that I spent an entire evening watching as many videos that I could find.
I requested to be contacted by the World Frozen Shoulder Clinic. Within 24 hours I was contacted by a very kind representative who told me exactly what to do. The process was relatively easy. Any x-rays or MRIs that were taken the progress reports and images were to be sent. The next evening I showed my husband the videos. After he watched many he asked what do we have to do? I told him I had already made contact. The next day I began to collect the information that was required and an appointment with the World Frozen Shoulder Clinic in Toronto.

I was so excited that I couldn’t wait to share my new found information with my frozen shoulder support group on Facebook. I was shocked when the group began to attack me a about my choice to go to Dr. Allen Oolo-Austin. I received statements such as “that is impossible frozen shoulder cannot be fixed in a day,” “why would you let a chiropractor do this to you, why not a dentist?” and the big one, “I would rather live in hell then to go through that torture.” I was angered by these comments so I retorted that I would rather live as a lion for a day than a sheep for the rest of my life. The leader of the group responded quite angrily that I must not really know what frozen shoulder is like because those with frozen shoulder are not sheep. Then I was immediately blocked from the site.

If I could I would like to reach to the members of that group and tell them I kept my appointment with Dr. Oolo-Austin two days ago. I can now lift my arm up beside my head, hug my family with my arms over their shoulders and have not had any zingers. Recovery continues with prescribed exercises. The arm is sore but not in pain.

Thank you Dr. Oolo-Austin for giving my life back!!!!!!

International patients coming to Canada for medical treatment are granted a specific medical procedure travel exemption. This means there is no 14-day quarantine when you arrive in Canada. Canadian Border Guards are informed of your arrival at the border so there is no need for any extra paperwork or stress. And you get the same federal travel exemption on the way back by your home country’s border security. So you won’t have to quarantine either when you return to your home country.