FROZEN SHOULDER TEST: HOW TO SELF DIAGNOSE

Do you suffer from shoulder pain? Have you lost range of motion in your shoulder? Frozen shoulder, a painful condition can last for years, could be to blame. Fortunately, it can be quickly diagnosed and resolved with the right treatment.

Before reaching out to us, many people are interested in taking our self-diagnosis test, which is included below. It was designed to help you determine more about your condition on your own by evaluating your range of motion.

This short test only takes a few minutes and will help you get started on the road to recovery. It will ask you a few simple questions, show you a few how-to videos, and have you replicate the actions demonstrated

Simply click the NEXT button below and get started on your self-diagnosis right away!

Once you have completed the Frozen Shoulder Self Diagnosis Test and clicked “Submit, someone on our staff will email you an explanation of your results. We’ll also provide you with a free frozen shoulder ebook!

One of our educational directors will also get in touch with you to answer any questions you may have about your test results, or about the OAT Procedure in general.

Get to know more about the frozen shoulder diagnosis.

What is Frozen Shoulder?

The leading indicator of adhesive capsulitis, which is commonly termed “frozen shoulder,” is restricted shoulder mobility that causes pain and results in a functional disability.

People who suffer from frozen shoulder often cannot raise their arm laterally above a line parallel to the ground (past 90 degrees, relative to their torso) without elevating the entire shoulder girdle.

This loss in active range of motion makes many daily activities extremely difficult, if not impossible. For people who suffer from frozen shoulder syndrome, everyday movements like putting on a t-shirt, placing the hands on the hips, or stretching the arms overhead are daunting and painful ordeals.

Pain at night, ranging from nagging to excruciating, is another common frozen shoulder symptom. This often leads to the kind of sleep deprivation that may eventually affect your life in very negative ways.

How is a Frozen Shoulder Diagnosed?

The process of diagnosing frozen shoulder syndrome is typically carried out through a process of elimination. During a diagnosis, a doctor or physical therapist will test the various active and passive ranges of motion of the shoulder joint capsule, such as internal and external rotation, lateral abduction, as well as your pain response.

These tests are carried out to eliminate other potential causes, such as a rotator cuff tear or other damage to the joint capsule.

The fastest way to diagnose frozen shoulder syndrome is by evaluating the active and passive range of motion in the affected shoulder.

To properly assess your passive range of motion, a physical exam by a qualified physical therapist is required, but you can easily identify certain key indicators on your own without having to go to a physical therapy clinic.

How your body responds when you attempt certain movements will give you a good idea of your active range of motion and identify a potentially frozen shoulder without the need for imaging tests.

Hand Behind the back test​ 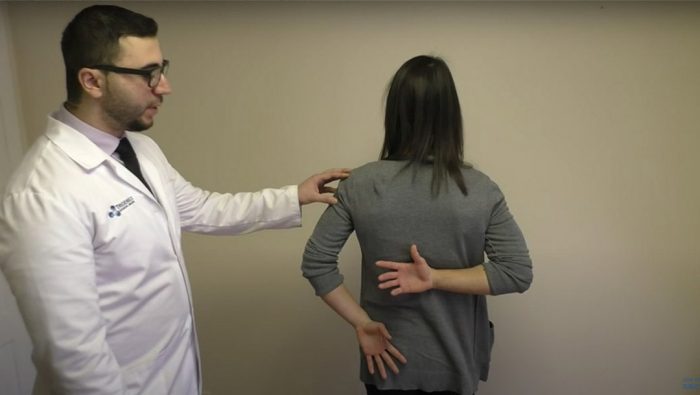 If any of the above describes your situation, you should definitely seek a physical exam and medical advice to begin the right corrective treatment.

Who Gets Frozen Shoulder?

Although frozen shoulder (adhesive capsulitis) can develop in most segments of the population, some groups of people are at greater risk than others. In general, frozen shoulder syndrome is more common for women than men. In fact, roughly two thirds of all people who present frozen shoulder symptoms are women.

Older populations are at greater risk than younger groups, as the frozen shoulder syndrome is extremely rare in people under the age of 40. In China and Japan, this condition is commonly referred to as the “50 year old shoulder” because of its prevalence around that age.

For people between the ages of 40 and 60, the occurrence rate of frozen shoulder is estimated to be roughly 5%, however, that figure jumps up to 20% for the diabetic population.

Also, people with a history of shoulder issues or injuries, such as a rotator cuff tear, are prone to the development of scar tissue in the shoulder, which can increase the risk of adhesive capsulitis.

It is estimated that worldwide, up to 300 million people suffer from adhesive capsulitis / frozen shoulder.

Similarities With Other Shoulder Problems

There are other potential shoulder problems that appear similar in outward appearance to adhesive capsulitis (frozen shoulder), but with different causes and treatment options.

Shoulder impingement syndrome is a catch-all phrase that describes a variety of shoulder issues, including rotator cuff damage. This syndrome has similarities to frozen shoulder syndrome, but it is not the same thing.

Shoulder impingement occurs when the tendons and soft tissue in and around the shoulder joint become trapped, irritated or torn, which results in pain and a loss of range of motion.

A shoulder impingement test can take several forms, but they all involve a physical exam where a physical therapist tests the various ranges of motion in the shoulder and the patient’s response. Imaging tests, such as x-rays or MRIs, are often used in conjunction with physical therapy to confirm findings.

If left untreated, shoulder impingement can lead to adhesive capsulitis. 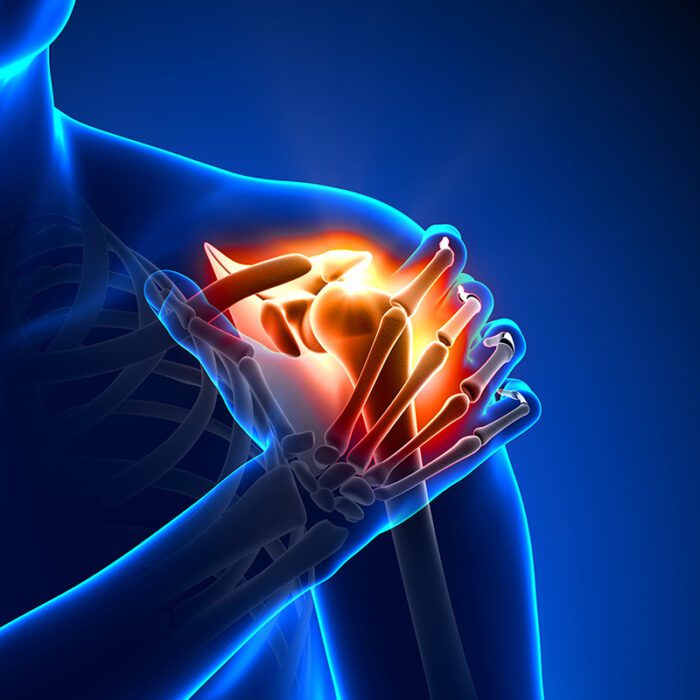 Shoulder pain can be a manifestation of several different conditions, any of which could potentially contribute to the development of frozen shoulder syndrome, including:

The adhesive capsulitis type of frozen shoulder, where the entire shoulder joint becomes surrounded with heavy adhesions which totally restrict movement and cause excruciating pain, often develops after the onset of one of the aforementioned conditions.

Seek Treatment for a Full Recovery

Without expert treatment, most shoulder conditions only get worse over time. If you experience shoulder pain and restrictions in the active or passive range of motion, you should seek medical advice to find the right kind of corrective physical therapy.

Many people rely on over-the-counter anti-inflammatory medication for relief for years, without ever fully resolving the issue. And while over 60% of people who develop frozen shoulder syndrome never fully recover, they can if they receive the right kind of expert curative treatment and physical therapy.

With the passage of time, the degenerative arthritic changes that occur when a joint capsule stops moving properly can lead to permanent shoulder damage. But the pain and range of motion issues associated with frozen shoulder does not have to be a permanent condition! 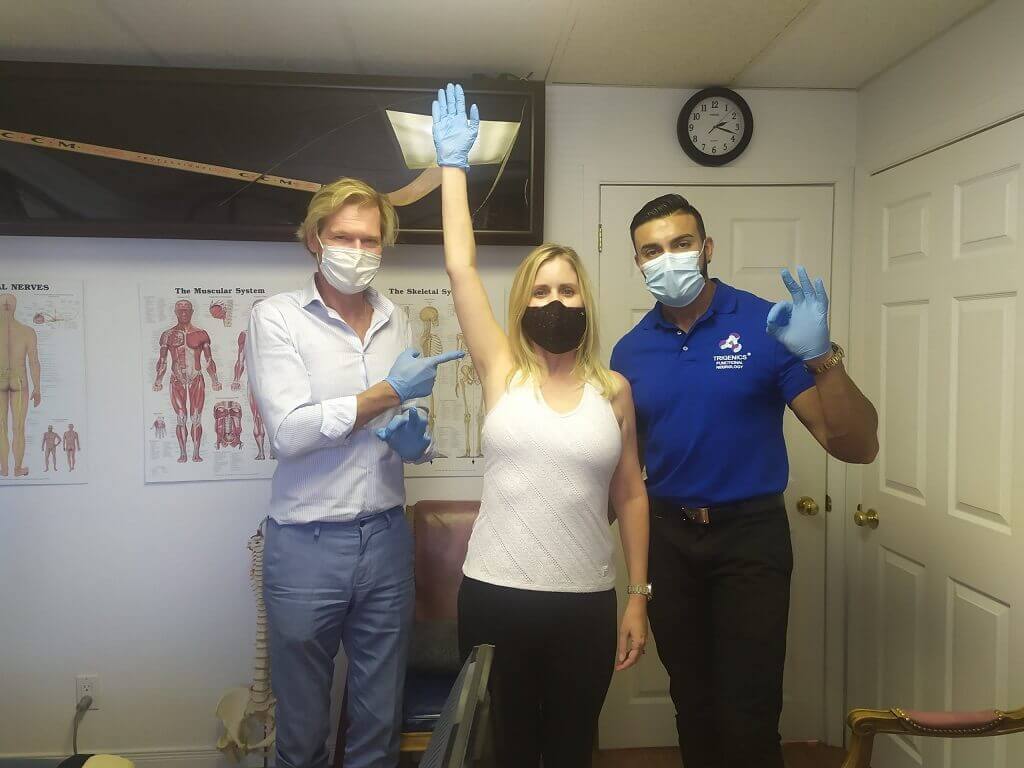 Although an experienced physical therapist can help manage pain and may mitigate some frozen shoulder symptoms, the novel neurological muscle pain treatments created by Dr. Oolo-Austin (better known to many as “Dr. O”) are the fastest and most effective way to treat adhesive capsulitis / frozen shoulder syndrome.

Dr. O’s specialized procedures and treatments are based on the principles of “neuroplasticity”. This treatment system causes an instantaneous and sustainable change in the way the brain communicates with the muscles to increase strength and movement with balancing of muscle pull dynamics.

He specializes in adhesive capsulitis / frozen shoulder and shoulder impingement conditions and has successfully treated thousands of shoulder conditions over the course of his 40-year career.

People with frozen shoulder and other shoulder conditions, travel internationally from around the globe for treatment at one of his World Frozen Shoulder Clinics, located in Canada, Estonia and New Zealand.

How to Sleep with a Frozen Shoulder